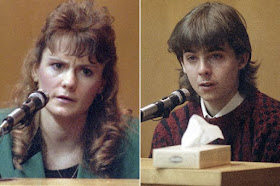 Continued from part one...

Pamela's co-conspirators had all secured their plea bargains before the trial began and she was painted as this black widow who seduced Billy and threatened to stop having sex with him unless he killed her husband.  Billy and his friends were portrayed as naive young boys whereas Pamela was seen as this cold hearted seductress, her behaviour didn't help either as she didn't show much emotion, some would say that her behaviour could have been down to anti-depressants but others believed her to be cold and unfeeling.

It was also revealed that Greg had a $140,000 life insurance policy which was said to be another motive for Pamela wanting her husband dead. Pamela admitted during the trial that she had the affair with Billy and that she broke it off. She said that she did not tell him to kill her husband.

After 14 days, Pamela's innocent act didn't work and she was found guilty of being an accomplice to first degree murder, conspiracy to commit murder and witness tampering. She nearly got the death penalty but the prosecution decided that a mandatory life sentence without the possibility of parole was more apt. Pamela showed no emotion as her sentence was read out.

Billy Flynn was sentenced to life in prison for second degree murder. During his years behind bars he was a model prisoner and worked as an electrician and a volunteer in charity work. He did try to have a sentence reduction and apologised to Gregg's family for what he had done but the reduction was denied. On the 12 of March 2015, 41 year old Billy was given lifetime parole and released from prison.

He said at his parole hearing: ''I know that nothing I can say here today will be of comfort to the Smart family, but at the very least. I sincerely hope that this will be the last time they have to be publicly reminded of their grief, and I am truly sorry for the pain I have caused them. I will always feel terrible about what happened 25 years ago, parole will not change that. I do feel a sense of responsibility to continually try to balance the scales that can't be balanced. I will try to do something with my life that matters and makes a difference.'' 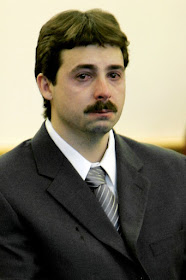 Billy married his wife whilst he was still incarcerated and they both live in Maine. Billy has always refused to speak to the press about the case and now just wants to get on with his life.

Billy's friends, Patrick, Vance and Raymond all served time in prison but were also released. Pamela is the only one who remains behind bars. She has tried several times to have her sentence reduced.

Some people feel that Pamela's sentence of life without the possibility of parole is too harsh and that she should be released from prison, others believe her to be innocent and believe her version of events that Billy and the boys carried out the murder on their own and just threw her name into it to get a lighter sentence. There is still a lot of people who believe her to be guilty.

There's so many articles and videos online with people for and against Pamela Smart's release. She has given many interviews and even has given her opinions on the movies based on her case. She wasn't happy with either 'To Die For' or 'Murder In New Hampshire'', she claimed that she was painted as an ''air head''.

Pamela is now 52 years old and despite all these years behind bars she still has an air of glamour about her. When I last saw 41 year old Billy Flynn at his parole hearing, he still had that young face (in my opinion), as if he hadn't aged in all those years.

She still claims that she is innocent to this day and at time of writing, she is trying to get parole again. She says that she is heavily involved with AIDS charity work and if she is released from prison she would like to work for the UN as an AIDS awareness ambassador,

Who knows what the outcome will be but she certainly has her supporters out there who believe in her innocence.

What do I think about this case? Based on the evidence that I have read I would have to say (in my opinion) that she did put Billy up to it but maybe didn't realise at the time that he would actually go through with it or what the exact consequences could be. She was 22 years old but a very young and naive 22 year old. The fact that she got involved with Billy Flynn who was only 15 years old, very young, very wet behind the ears and thought that he would be the best person to help her in that situation. The fact that she believed it would never be traced back to her and that all of the TV interviews she did wouldn't look suspicious to the police. 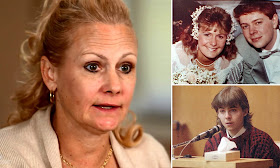 Her reaction to Greg when he cut his hair and wanted to make something better of his life and settle down, she should have been pleased for him but she acted ridiculous especially after he cut his hair. It sounds to me like she lived in a bit of a fantasy land in her head but again, she was just 22 years old. Do I think she should remain behind bars until death? I think she should be given parole. The fact remains that she didn't pull the trigger but she has spent a big chunk of her life in prison and the others have been released. Everybody knows what she did and she will forever be looking over her shoulder as she will always be known as the woman who seduced a 15 year old boy and convinced him to murder her husband. Do I think she's innocent? No, I think she had a part to play in this with the planning and the pressure on Billy plus trying to cover everything up with Cecilia.

What are your thoughts on this case? Should Pamela still be behind bars or do you think it's time she was released? Let me know in the comments below or on my social media platforms.

As always, thank you for reading my posts and for all of your continued support I really do appreciate it x

If you enjoy my weekly posts and you would like to donate a coffee to me, you can do so here

Sign up on my Kofi page as a monthly supporter and receive access to my personal posts as well as the opportunity to request cases.

Let's be friends on Instagram, you can now find me at: @KittysOnTheCase

Check out some of the true crime cases I have covered previously:

- Beyond Evil: The Murder of Jessica Lunsford

- What Really Happened To Mavis Bran?

- Nowhere To Run: The Marilyn McKenna Story | Part One

- Unsolved : Part Three: The Highway Of Tears & The Disappearance Of Maddy Scott

- The Dark Side of The Internet: The Amanda Todd Story

- The Story of Bible John

- Absolute Monster: The Story Of Peter Tobin | Part One

- Someone Knows | The Caroline Glachan Case

- What Really Happened To India Chipchase?

- What Happened To Dominique Dunne?

- What Happened To Heather Elvis?

- My Interview On Weirdnliberated's Blog

For all of my personal (18+), NSFW posts, check out my Kofi page

Keep up to date with my latest posts on: @CaledonianTweet & Bloglovin