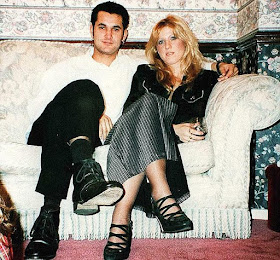 It was a story that shocked the UK back in the mid nineties and is still remembered to this day. A 27 year old woman and her 25 year old fiance were reported to be the victims of a horrific road rage attack by two men in the late hours of the 1st of December 1996 in Alverchurch in Worcester, England.

The woman had narrowly escaped the two men and had suffered from a black eye and bruises to the face. She screamed for help as she held her deceased fiance in her arms as he had suffered multiple stab wounds. Two witnesses heard the commotion and ran to her aid and an ambulance and police were called to the scene.

The young couple, known as Lee Harvey and Tracie Andrews had been having a quiet drink at a pub and as they were driving home, Lee noticed a car behind them. The car was beeping the horn and speeding up close behind them. Lee was annoyed and stopped the car to which the car behind him followed suit. One of the men got out of the car and began to physically fight with Lee. The other man who was described as older, got out of the car and joined in the fight. Tracie was screaming for them to stop and tried to intervene but was punched and pushed to the ground by one of the men.

Suddenly, Lee fell to the floor and the two men jumped back in their car and sped off. Tracie realised that Lee had been stabbed multiple times, she held him in her arms and screamed for help. This was the story that was originally reported to the police by Tracie Andrews and the press also shared these details. What nobody knew at that time was that Tracie had made the whole story up and continued to manipulate and lie until she couldn't lie any more as everyone was soon to find out.

So where did all this begin? It began two years before when Lee Raymond Dean Harvey and Tracie Marguerite Andrews first laid eyes on each other in a nightclub in Worcester. They would describe it as love at first sight though other people may say it was more like lust. They didn't waste anytime and slept together that same night. Lee bragged to his friends and family about how amazing the sex was and that he was falling head over heels for Tracie.

Tracie was a blonde, glamorous single mother who worked as a barmaid and part time model. She dreamt of becoming a glamour model and loved the attention that she got from men as she walked down the street or danced in a nightclub. She loved to turn heads and would wear sexy outfits and heels to make sure that all eyes were on her, if attention wasn't on her at all times she would turn sour. She had a difficult upbringing and never got over her dad walking out on the family when she was very young. As well as the need for attention, she would have mood swings and often explode in temper tantrums which would see her romantic relationships not lasting very long.

She had difficulty maintaining relationships with lovers, friends and relatives due to her up and down behaviour and people who knew her describe how they felt like they were walking on eggshells whenever they were around her and didn't know when she was going to explode next.

Her image as a pretty blonde, girly girl who just loved to have fun and party was hiding a dark, troubled persona underneath. She was very much a Jekyll and Hyde character.

Lee was a good looking popular young man who would go out regularly with his friends for drinks. He was also a single father and adored his daughter Danielle. He was close with his family and was described by those that knew him as very much a family man. He worked hard to provide for his daughter as a bus driver and got on really well with customers and colleagues. He wasn't a complete angel though, like a lot of young men, he liked to be a man of the ladies and often thought with his trousers instead of his head. He claimed that Pamela Anderson was his dream woman and he would often go for women who had an ample bosom. Lee was just a young man who did have his priorities in order with his daughter and job but he did like to be a bit of a party animal and Jack the lad too.

Things moved pretty fast between Tracie and Lee and before anyone knew what was happening, he'd moved into her house. His mother, Maureen was a bit concerned that things were happening too quickly and she didn't feel 100% about Tracie either. According to Maureen, the first time that Lee brought Tracie to meet her and her husband, she practically told them her life story in 30 minutes. Maureen didn't feel comfortable with how Tracie was trashing her relatives and ex boyfriend. Maureen could see that despite Tracie's outspokenness and good looks, she was very insecure.

As is the case with most of these situations, everything seemed to be great for the first few weeks of Tracie and Lee living together. Tracie's daughter Karla got on very well with Danielle and loved pretending to be sisters. Cracks started to appear in the relationship over silly things. Tracie didn't like Lee going out with his friends and would accuse him of looking at other girls. Lee would get angry if her ex boyfriend (who was Karla's dad) would call the house to arrange when to pick Karla up. The fights always seemed to be worst at the weekends.

Maureen lost count of how many times she would see Lee coming up her driveway with bags full of his clothes, scratches on his face and a story about how he and Tracie had an argument. He'd tell Maureen and his dad that he was never going back. The next day he'd make an excuse to go and see her to collect something and they'd end up in bed together. It seemed to go on and on as if Lee and Tracie got a thrill out of arguing just so that they could have sex and things would be ok for a few days then it would start again. It was becoming clear from the scratches on Lee's face that the arguments were getting physical. Tracie also liked to bite Lee during an argument. Nobody knows for sure if the bites were part of a sex act or during a fight between the pair. Tracie never appeared to have a mark on her.

Maureen and her husband tried to convince Lee that this relationship wasn't good for either of them and they were tired of him coming back and forth as well as being worried for his safety. Maureen called Tracie and told her that she wasn't happy with how she was treating her son. For some reason, rather than take his parents advice, Lee thought it would be a good idea to ask Tracie to marry him. He thought that this would calm her down and she'd realise how serious he was about her and stop accusing him of cheating on her with other women.

He told his parents he was going to ask her to marry him, they were not happy about it but felt that they had to respect Lee's wishes. They were sworn to secrecy and Tracie was over the moon when Lee asked her. She immediately said yes. Lee told her that nobody else knew about the engagement so Tracie wanted to do a big announcement at his Mother's barbecue that was coming up at the weekend.

Let's be friends on Instagram, you can now find me at: @KittysOnTheCase

Check out some of the true crime cases I have covered previously:

- What Happened To Dominique Dunne?

- What Happened To Heather Elvis?

Keep up to date with my latest posts on: Bloglovin